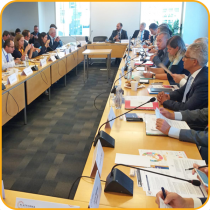 A joint PLATFORMA-CEMR delegation was in New York last week to attend the UN summits and high-level meetings on Climate Action (23 September) and Sustainable Development (24-25 September). Local and regional leaders also met a delegation of EU officials, including Members of the European Parliament (MEPs) from the Committees on Development and the Environment.

This breakfast meeting with EU officials was hosted by the Ambassador of the EU in New York. It gathered over 65 representatives, including 28 MEPs and their political advisors from the Committees on Development and the Environment, the Committee of the Regions 1st Vice President Markku Markkula, the director of DG Climate Action Yvon Slingenberg or the head of unit at DG Devco Stefano Signore.

Participants analysed key priorities at the moment, such as the SDGs and their localisation, decentralisation reforms or decarbonisation measures. Our delegates called on EU institutions to work with local and regional governments to achieve the global agendas, to set and EU strategy to decarbonise our societies by 2050 or to support decentralised cooperation as a crucial tool to achieve the UN Global Goals.

MEPs raised their interest around the following aspects: cooperation ways with local and regional governments, awareness raising campaigns for citizens on SDGs as a priority activity for local leaders, the power of public-private partnerships (PPPs) for regional and local collaboration, or the need to dedicate specific budgets and programmes for local and regional governments.

Overall, this meeting showed a clear willingness to work together between EU institutions and mayors or presidents of regions. CEMR Secretary General Frédéric Vallier asked the EU representatives to ensure a specific budget line for local and regional governments in the future Neighbourhood, Development and International Cooperation Instrument. He also called for the the SDGs to be considered as underlying principles for next Commission’s strategies and for a regular dialogue with DG Climate Action ahead of the COP climate negotiations.

This Forum represented an opportunity to take stock of the lessons learned until now, and to explore new ways in which successful local, national and international policies can be scaled up. PLATFORMA-CEMR representatives spoke at the Forum and some of them also presented formal engagements.

More information on the 2nd Local and Regional Governments Forum on the Global Taskforce website.