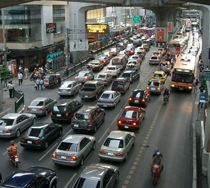 The introduction of buses running with used cooking oil, liftsharing and the setting of transport management strategies, these were some of the new schemes developed in several European cities and rewarded at NICHES final conference, in Toulouse, on 16 March 2007.
Some 250 experts and local elected representatives participated in the NICHES conference (New and Innovative Concepts for Helping European transport Sustainability) which aimed at promoting innovative concepts and schemes set out to improve urban transport. Many cities around Europe have already found ways to tackle transport related problems, i.e. traffic congestion, pollution or road accidents. However these successfully implemented innovative actions can, at a European scale, benefit to other cities facing the same problems.
Jacques Barrot, European commissioner for transport, recalled in that context that the Commission will present a Green paper on urban transport in Fall 2007. It will, he said, examine all the different approaches implemented in European cities. These include for instance the introduction of urban road charging to restrict the access to city centres of car, the setting of 'green" zones, and the use of alternative fuel.
Jean-Luc Moudenc, the mayor of Toulouse, the host city, highlighted that all the schemes presented during the conference did not only contribute to tackle pollution, road accidents and other transport related problems inside cities. They also helped to create jobs and considerably improve people's quality of life.
The OSMOSE awards (Open Source for MObile and Sustainable city) have also been rewarded to Barcelona, Bremen, Graz, Freiburg and Stockholm, as well as the region of Emilia Romagna. They have introduced innovative and daring measures to improve urban transport.
All concepts and approaches on urban transport are available on NICHES website.
Background information
NICHES is a EU funded project. It aims at stimulating a wide debate on innovative urban transport and mobility, and to promote the most promising new concepts, initiatives and projects. It was launched in November 2004 for a two year period, after which the final results and materials were presented and discussed in a final conference, in Toulouse, on 16 March 2007.
NICHES seminar was organised by POLIS (the network of municipalities for innovative and sustainable transport), together with the Council of European Municipalities and Regions (CEMR), the Committee of the Regions, Rupprecht Consult, PTV, Eurocities, the city of Stockholm and Warsaw University of Technology.
CEMR's activities in the field of transport