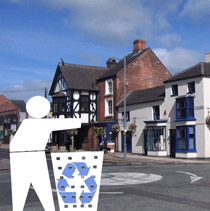 The 'pay as you throw" system: less cost and waste ... more recycling

Encourage people to produce less waste and recycle more, this is the overall objective of the Flemish "pay as you throw" system, which British councils might introduce as well.
A few years ago, in the Flanders city of Lokeren, the cost of rubbish collection was included in the main local tax - as it is currently the case in Britain. Today, the Flemish local authority has introduced a system where people pay a separate annual waste fee. On top of that, they pay variable charges based on the weight and volume of waste they leave for collection. The bins are weighed before and after they are emptied on the truck and the weights recorded in the cab.
For those who do not make an effort to limit their waste, the total final bill for the year including the fixed charge can be twice as high as the cost for recyclers.
According to the statistics from the city, the results are most positive: nearly 80% of household waste is recycled in Lokeren. As a comparison, the rate is more than three times that in England as a whole.
More information on the Flemish "pay as you throw" system is available on the BBC website.