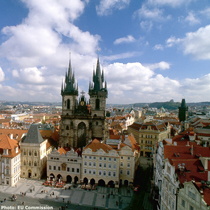 The air quality directive adopted by the European Parliament on 11 December sets an adequate basis for taking measures and limiting levels of dust particles in the air, however local and regional government wished more flexibility.to implement the new legislation.

The Council of European Municipalities and Regions (CEMR) is pleased that two of its main concerns are reflected in the adopted text: a fair burden-sharing among all relevant actors and realistic limit values for certain pollutants, notably for particulate matters (PM2,5 and PM10). However, CEMR's call for sufficient flexibility to cities and municipalities when implementing the legislation is only partially taken into consideration.

As called for by CEMR, the text includes the requirement to take Community measures to reduce pollutants at their sources. Indeed, local government would not be able to reduce the levels of pollution in the air, if no measures are taken to limit emissions of pollutants in the air, said Angelika Poth-Mögele, Head of Policy at CEMR. In other words, we are pleased that the European Parliament adopted a text that reflects the "polluter pays" principle; this means that sectors like transport, industry and agriculture will have to take measures to reduce air pollution as well. It will enable local authorities to achieve the limit values in time and at reasonable costs.

The European Parliament also followed CEMR's recommendation by accepting the Council's position on limit values for particulate matters PM2,5 (25Ã¬g/m³ per year from 2010). From 2015 this figure would become a binding limit. For the bigger particulates (PM10) the limit value remains unchanged compared to the current directive (Directive 1999/30/EC). With the new directive, cities and municipalities that cannot meet the limit values for PM10, but have put in place appropriate plans for reducing the air pollution, might be given an extension of additional three years.

The Council of Ministers is expected to adopt the text at its next meeting on 20 December; no major changes are expected.
CEMR's position on the Air quality directive
The European Parliament's website