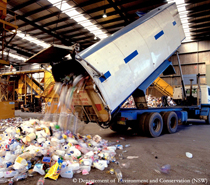 A study by the European Environment Agency states that the amount of municipal waste produced each year is expected to grow by 25 % from 2005 to 2020.
Each European citizen currently produces an average of over half a tonne.of municipal waste a year. This amount should further increase to 680 kg per person by 2020. This projected continuing increase in waste volumes is primarily due to an assumed sustained growth in private final consumption.
However, there are significant differences between citizens from the old (EU‑15) and the new EU Member States (EU‑12). While an EU‑15 citizen generated 570 kg on average in 2004, the figure was only 335 kg for an EU‑12 citizen.
Disposal by landfilling has always been the predominant treatment method for municipal waste, but over the last two decades considerable reductions in landfilling have taken place. In 2004, 47 % of total EU municipal waste was landfilled. This is expected to decrease further to around 35 % by 2020.
What solutions to the ever increasing production of waste ?
Increased recovery of waste (i.e. the use of waste materials after their initial discard, including recycling and the use of combustible materials for energy); and diverting waste away from landfill play a key role in tackling the environmental impacts of increasing waste volumes.
The study reveals that recycling and other material‑recovery operations are expected to increase from the current level of 36 % to around 42 % by 2020. Limiting or avoiding growth in waste volumes would further reduce greenhouse gas emissions from the waste sector and deliver other benefits to society and the environment.