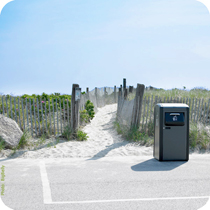 High-tech rubbish bins in our streets?

Municipalities and cities across France and Belgium are testing a new generation of intelligent rubbish bins: the waste compactors.
These high-tech bins hold up to five times as much waste as a conventional bin. Compacting the rubbish reduces the frequency of emptying the bins, which in turn reduces emissions of pollutants into the air and lowers cost.
These intelligent bins are already deployed across the United States (Boston, Baltimore, Chicago...) and in many countries around the world.
However, high-tech comes at a cost: a single unit is sold for about €4,000. Furthermore, it has been argued that compacting the rubbish means removing oxygen from it, which slowers down the decomposition process.
Source: Bigbelly