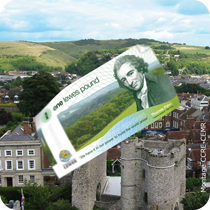 Local currencies to beat the crisis?

More and more European local authorities resort to issuing their own "local currencies" as a way to boost local trade and create jobs.
The Brixton Pound (B£) has become the fourth new currency introduced in the UK since 2007 and, according to sources, is now accepted by more than 60 local businesses. Traders in Brixton say the introduction of the local currency has been a boost for its economy. The town of Lewes in southern England has had its own currency since 2008.
In Ireland, the tourist resort of Kilkenny is set to launch its own local currency (the Kilkenny Cats) as from 2010, in an effort to encourage tourists to spend their money locally before leaving the city. As an incentive, the Kilkenny Cats can be bought for 95c but will buy £1 worth of good in the town shops.
Other towns and cities in Germany, Belgium, the Netherlands, Spain, Italy and Latvia have already their own local currency.
It is worth stressing that such currencies are not backed by national governments and are not legal tender outside the boundaries of the issuing local authority.
(source: Euractiv)
Translate