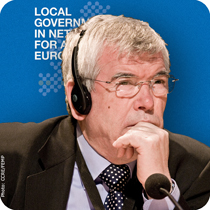 Local governments are the drivers of economic recovery

It will be almost impossible to emerge from the crisis without the help of local councils, since 70% of EU legislation is applied at this level.
That was the call the President of the Spanish Federation of Municipalities and Provinces.(FEMP), Pedro Castro, gave at the opening ceremony of the European Summit of local governments, from 22 to 24 February 2010.
He warned that the crisis must involve every administration. (...) The actions taken by national governments to cope with the crisis will have no effect if not coordinated with the local level.
In his speech, Spanish minister of territorial policy, Manuel Chaves, pointed out that the Spanish Presidency of the EU is committed to applying the Treaty of Lisbon, lifting the EU out of the financial crisis "as soon as possible", creating employment and "ensuring that the EU becomes rooted in the conscience and desires of its citizens" through "multilevel governance", in other words, with a bigger role for local government.
Manuel Chaves advocated moving on from an "outdated pyramid model" and strengthening a kind of Europe that serves the real needs of its citizens, in which he believes local councils should play "a more active role" in the EU.
The secretary general of the Council of European Municipalities and Regions, Frédéric Vallier, moderated a session on decentralisation, funding and local autonomy.
Background information
Local governments from 42 countries are meeting in Catalonia from 22 to 24 February 2010 to create the "Barcelona Agenda", which is defining solutions to the economic crisis, climate change and the social inclusion problems to be solved by 2020, from the perspective of local governance, in the hope these will influence the EU.
See also: The impact of the economic crisis at local and regional levels
Translate