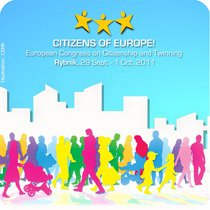 Day one of CEMR's European Congress on Citizenship and Twinning

The European Congress on Citizenship and Twinning kicked off in Rybnik, Poland, on 29 September 2011, with close to 300 participants from 31 European countries, including representatives from municipalities and regions, European institutions, the Polish EU presidency, civil society and.experts in citizenship and town twinning.

The Congress is organised by the Council of European Municipalities and Regions (CEMR), in partnership with the Association of Polish Cities, a CEMR member association, and the City of Rybnik, with the financial support of the European Commission and under the patronage of the Polish EU presidency.

During the Congress opening, participants discussed active citizenship, Wolfgang Schuster, president of CEMR and mayor of Stuttgart, having underlined 'ownership" of as being a big part of citizenship. Indeed, 'the future of European integration will very much depend on the involvement of citizens in the European debate and decision-making process," further explained Ylva Tiveus, director of the citizens unit in the European Commission Directorate General for communication. 'Otherwise, we run the risk of a democratic deficit and of a lack of accountability and support for the decisions taken."
'Everyone can contribute to Europe," declared Schuster, 'as key issues at the European level are also key issues in our municipalities and regions. However, we must beware of the growing nationalistic tendencies, as these have never been good for Europe", he warned. 'We must see this crisis as a chance to further unify the continent." Enrique Baron Crespo, former president of the European Parliament and president of the European Foundation for Information Society, pointed out that 'we have to be aware that we are all on the same boat. We are either going to sink or swim, but we must do it together!"
Mayor of Rybnik, Adam Fudali, shared his experiences as the elected representative of a city of over 140 000 inhabitants, stating that 'EU financial support provided Rybnik and other Polish cities with the opportunity to pursue bold investment strategies. Town twinning links then allowed us to show the transformation our city had undergone thanks to these EU funds." Jerzy Buzek, president of the European Parliament and honorary citizen of Rybnik, underlined during the Congress opening 'the importance of allocating the appropriate amount of funds in support of town twinning and citizenship". This is especially vital when considering that Poland was perceived very negatively when town twinning first came to the country in the early 1990's, a vision that changed notably thanks to exchanges between Polish municipalities and other European local authorities.