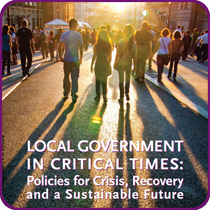 The Council of Europe has launched a book entitled Local Government in Critical Times: Policies for Crisis, Recovery and a Sustainable Future, which outlines the local level’s financial and budgetary development over the last three years.

Produced in collaboration with the Council of European Municipalities and Regions (CEMR), the book includes passages on the impact of the economic downturn, as adopted at the 17th session of the Council of Europe’s Conference of ministers responsible for local and regional government, held in Kyiv (Ukraine).

“Ever since the beginning of the crisis, CEMR has repeatedly shown that this situation can in fact prove to be an opportunity for Europe to define a new model of growth based on an endogenous development of territories,” recalls Frédéric Vallier, CEMR secretary general.  However, this remains possible “so long as the states do not engage in a policy to recentralise means and that they preserve intact local and regional authorities’ financial independence and their capacity to act.”

In addition to analysing the crisis, this publication highlights several policy proposals, which demonstrate the important role of local and regional authorities in the recovery process when implementing these recommendations.

The publication, published on 21 March 2012, will notably be an important tool for national governments, local government ministries, finance ministries, local and regional authorities, their representative associations and non-governmental organisations.