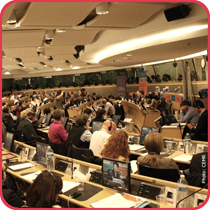 The main challenge for the new 2014-2020 cohesion regulations is to ensure that the instrument for community-led local development* (CLLD) is flexible and does not create competition between the different territories and stakeholders.  Thus, the selection process for EU fund beneficiaries must be quick and transparent.

Such was underlined by participants of the main workshop of the 2012 Open Days, organised on 9 October 2012 by the Council of European Municipalities and Regions (CEMR), a number of its national member associations of local and regional government and the European Commission.*

In order to achieve simplification we must first establish harmonised rules for the implementation of the five EU funds** involved, then allow for a lead fund to be established to cover running costs of the local strategy in place, and apply a single approval procedure for local development strategies.  Such was underlined by José Manuel Sousa Uva, director of horizontal aspects of rural development at the European Commission Directorate General for agriculture and rural development (AGRI).

Participants agreed that an integrated delivery of funds would answer the specific needs of local communities and businesses as well as make it easier for them to access the funds they need.

CLLD is an opportunity for municipalities and regions and their citizens to be inventive, innovative and resourceful, especially in these times of need triggered by the crisis, highlighted Michael Dower, a representative and member of the Agriculture and Rural Convention (ARC).

Workshop participants underlined the need to adopt a completely new approach to the cohesion regulations in order for member states to truly work in cooperation with local and regional authorities and their elected representatives.  The partnership principle cannot be watered down.

“For us, it is very important that municipalities and regions are fully empowered when it comes to delivering EU funds in the next programming period,” declared Frédéric Vallier, CEMR secretary general, at this occasion.

Some hundred elected members from the Erasmus programme for local and regional elected representatives, European and national councillors, members of European Parliament and experts participated in the workshop, held under the patronage of the Committee of the Regions.

* CLLD implies the mobilisation and direct involvement of local actors and resources to put into place local actions and projects, answering local needs while supporting the long-term potential of the territory in question.  It notably entails community capacity-building, community ownership, the setting-up of bottom-up approaches via a system of multi-level governance and the involvement of the private sector through public-private partnerships.

The photos available in the multimedia gallery.