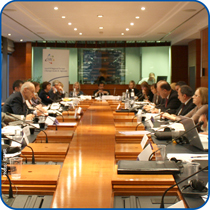 As the proverb goes: don’t waste a good crisis!  The question is who has the right remedy for today’s crisis?  This question was put forward by Gerhard Stahl, secretary general.of the Committee of the Regions, to the secretaries general and directors of the Council of European Municipalities and Regions (CEMR)’s members associations, during their meeting held on 15 November 2012 in Brussels.

In order to get a better idea of what needs to be done, “Europe needs to get a better picture of what citizens’ impressions are on the ground, especially given the current crisis and economic situation,” Gerhard Stahl continued.  He notably quoted a Eurostat study, which states that an average of 60% of people in Europe’s regions is most concerned about unemployment and 30% about the economic situation, while other issues such as environment came in at an average of 6%.

The role of local and regional authorities in the European governance

“While the European Union is a union of states, it is first and foremost a union of citizens.  And between the state and the citizens, there is local and regional government,” stated Mario Paulo Tenreiro, head of the general institutional issues unit of the European Commission Secretariat, at this occasion.

In this regard, Stahl added that it could be interesting to envisage the creation of a map of the distribution of competences at the different levels of governance within each member state and it with the distribution of public funding.  This would allow those making legislative proposals at the EU level to have a better understanding of the consequences of their proposals.

The secretaries general and directors exchanged with the above-mentioned guests and also discussed upcoming challenges in the framework of CEMR’s 2013 work programme.