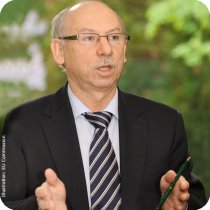 EU Budget Commissioner, Janusz Lewandowski, recognised the vital role of local and regional authorities and expressed his willingness to work with these in the context of the EU budget review and beyond, at the occasion of a high-level informal exchange held on 17 May, in Brussels.

The exchange brought together the Commissioner and representatives from the Assembly of European Regions (AER), the Conference of Peripheral Maritime Regions (CPMR), the Council of European Municipalities and Regions (CEMR) and EUROCITIES.

'Europe needs to concentrate on how to improve the delivering mechanism of cohesion policy, but I am sure of the fact that this must be done through a decentralised management system and multi-level governance. Local and regional authorities must feel a sense of programme and policy ownership, so as to help close the gap between distant Brussels and European citizens," Janusz Lewandowski, EU Financial Programming and Budget Commissioner.
'Small, interregional and private-public projects, among others, can provide European policies with added-value while mobilising citizens locally. Thus, it is very important that the EU budget not solely concentrate on bigger projects as this would allow for smaller municipalities and regions to be a part of the European project-building and so that everyone may benefit from EU funds," Frédéric Vallier, CEMR Secretary General.

'We are against the renationalisation of Cohesion Policy. It must remain a strong EU policy covering all of our regions. In this, the local and regional levels are the European Commission's natural partners," Daniel Termont, EUROCITIES Executive Committee member and Mayor of Ghent, Belgium.

'A sectoral organisation of policies has never existed at the EU level, and nor should it. Sectoralisation would not lead to efficient spending with impact and would create a very negative image of Europe in its citizens' eyes," Klaus Klipp, AER Secretary General.

'EU money creates an opportunity for growth and innovation that would not be there otherwise because our normal basic budgets are not able to do anything like that. Our concern is that a drastic reduction or an absence of funds in the next programming period could result in serious damage to our economy as well as jeopardising the efforts made thus far," Carolyn Rule, Cabinet Member for Economy and Regeneration, Cornwall Council, United Kingdom.
'Structural funds are not a tool, they are a policy for regions lagging behind but also for competitiveness. We must reassure local and regional authorities using funds that the Cohesion Policy will continue to stand on its own and will become ever stronger in the future," Eleni Marianou, CPMR Secretary General.

'In the context of a possible Europeanisation of funds, I believe that the EU should be competitive and should thus remain balanced in its approaches and ambitions. We must avoid the dismantlement of existing policies," Janusz Lewandowski, EU Financial Programming and Budget Commissioner.