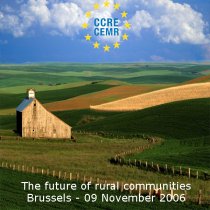 What future for rural communities in Europe? (CEMR conference, 09.11.06)

The Council of European Municipalities and Regions (CEMR) is organising a seminar on the future of rural communities, on 9 November 2006 in Brussels.
The seminar aims at assessing the current situation of rural communities in Europe, identifying the perspectives for their future as well as their contribution to the future of Europe. Two parallel workshops will show cases of best practice in diversifying rural economies and in delivering public services.
Speakers will include:

. The president of the French section of CEMR, Louis Le Pensec
. The mayors of Kalmar (SE), Bergkamen and Mönchweiler (D), Hledsebe (CZ)
. A representative of the Finnish ministry of the Interior, Janne Antikainen
. Member of the European Parliament, Czeslaw Siekierski
. The deputy director general of the European Commission's DG Regional Policy, Michele Pasca-Raymondo
. The head of the territorial reviews and governance division at the Organisation for Economic Cooperation and Development, Mario Pezzini
. Representatives from associations of local and regional governments from Austria, Britain, France, Luxembourg, Norway... and academic experts.
The conference will take place as EU institutions start their preparations for the EU's budget framework for after 2013. The reassessment of the EU's financial framework will include a review of the future of EU rural development policy.
Practical information
Date: 9 November 2006, 09:30 to 17:30
Venue: Mission of Norway to the EU, rue Archimède 17, 1000 Bruxelles
No participation fee
Languages: English, French, German
Registration form; (Registration form in German)
Full programme of the seminar on the future of rural communities; (Full programme in German)