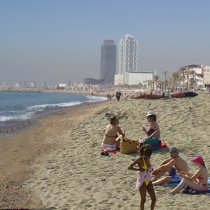 Bathing water: CEMR calls on Parliament to fully exclude recreational waters from the scope of the directive

The Council of European Municipalities and Regions (CEMR) supports the revision of the directive to improve safety standards further and ensure strong communication to the public on bathing water quality. However, the success of the directive could be jeopardised if the European Parliament supports the proposal to extend aspects of it to recreational waters (used mainly for water sport such ascanoeing, wind-surfing, sailing...).
The Parliament will vote on the draft directive at its 9-12 May plenary session. Amendment 18, proposed by the rapporteur, would require that the public is informed on the quality of recreational waters. This indirectly amounts to local authorities having to monitor the quality of such waters. However, recreational waters have different characteristics than bathing waters. Also, the recreational season is much longer than the bathing one, and, since the practice area is much wider, sampling points would have to be multiplied.
The monitoring requirements this amendment would demand would be disproportionate to the public health risk of recreational waters. Furthermore, local government and environmental regulators do not have access to the type of information this amendment would require, and to do so would involve disproportionate costs.
CEMR therefore calls on the members of Parliament to keep the original focus of the directive on bathing water and to reject amendment 18.
Generally, CEMR is of the view that the Common Position, as agreed by the Council, offers a good compromise between feasibility and public health protection.
Local authorities play a substantial role in managing bathing waters and ensuring high levels of public safety at bathing sites. The 1976 directive on bathing water has had a significant impact on the quality of beaches and bathing sites throughout the EU, and as a result has made many bathing areas cleaner and more prosperous.
CEMR's full position on the bathing water directive
CEMR's letter to MEPs on the bathing water directive
The Commission's draft directive on bathing water