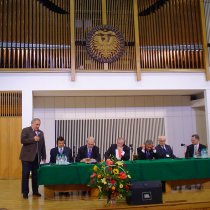 Meeting of CEMR's policy Committee (Lublin, 8-9 May): Europe's local and regional government looks beyond the EU

CEMR's Policy Committee met in Lublin (Poland) on 8 and 9 May 2005.
CEMR's President, the mayor and governor of Vienna, Michael Häupl, chaired the meeting alongside CEMR's first vice-president, the mayor of The Hague, Wim Deetman. Other participants included CEMR's vice president and mayor of Lublin, Andrzej Pruszkowski, Member of EU Parliament and CEMR's vice president, Oldrich Vlasak, and Member of EU Parliament Jan Olbrycht.
The meeting started with a debate on the Union's new borders following the latest enlargement. The Policy Committee's members agreed that it is important to carry on preparing local and regional governments from countries neighbouring the EU, such as the Ukraine, to adhesion to the European Union, by helping them improve their local structures for instance. Mutual trust and cooperation can sometimes be best created at the local, said CEMR's president Michael Häupl while reminding the floor that the EU neighbouring countries are still divided between the candidate countries and the others. Oldricht Vlasak stated that CEMR is one of the most important organisations for the new Member States and the candidate countries.
The participants to the Lublin meeting also approved CEMR's position on services of general interest, and the draft position of the directive on services.
Beyond the European Union...
CEMR's Policy Committee approved the membership request from the Association of Albanian Municipalities. The only European countries in which CEMR has no members are Croatia, Bosnia, Belarus and Romania. (The policy Committee also approved the membership request from the Association of the Mayors of France).
It also approved the secretariat general's proposal to create a "world affairs" committee within CEMR. Note: CEMR represents Europe within the world association of local governments, United Cities and Local Governments (UCLG).
The meeting of the policy Committee coincided with the celebrations of the 60th anniversary of the end of World War II. Participants lay a wreath at Maideneck concentration camp, outside Lublin.
Translate