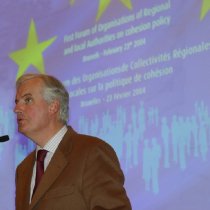 Some 400 delegates attended the forum on cohesion policy, organised in Brussels by the Association of European Border Regions, the Conference of Peripheral and Maritime Regions, the Council of European Municipalities and Regions and Eurocities.
The Commissionner in charge of Regional Policy, Michel Barnier, presented the third cohesion report and then asnwered the questions from representatives of Europe's towns and regions.
The forum ended with the adoption of the joint statement from local and regional authorities. The full text of the statement is below.
Joint statement from organisations of local and regional authorities
on cohésion policy
The four European organisations of regional and local authorities (AEBR-CEMR-CPMR and Eurocities) meeting in Brussels on Monday 23 February 2004 in the presence of Commissioner Barnier, invited to present the main conclusions of the third cohesion report, were keen to express their full support for Michel Barnier's proposals, which on the whole live up to their expectations. They also reiterated their firm intention to defend and promote the main points of these proposals throughout the next two years of negotiations now due to get under way with the Member States and European Parliament. Indeed, these views were expressed before a large number of States' Permanent Representations in Brussels who were also in attendance.
As far as the four organisations are concerned, the Commission's proposal offers a sustainable framework that will allow regional and local authorities to play an active role in European competitiveness and contribute towards the territorial cohesion of the Union, not just for the period 2007-2013 but over the next 20 years. However, they would like to see more comfortable budget margins established, especially for the future objective of regional competitiveness and employment. Once the negotiations come to a close, they are ready to rapidly begin implementing these priorities in order to ensure that this policy meets with success.
Speaking through their political representatives and before an attendance of over 350 people, they particularly wished to stress the most positive aspects of the Commission's proposals, namely:
- involving all of Europe's territories in the Lisbon and Gothenburg strategies,
- promoting the principle of territorial cohesion,
- taking into account regions affected by the statistical effects, territories suffering from permanent handicaps and the outermost regions,
- seeking a real strategic coordination between the objectives of the EU, states and regions,
- bringing up to date and strengthening the notion of partnership, especially between cities and regions, coupled with more decentralisation,
- taking into account the urban dimension,
- efforts undertaken in favour of cross-border and transnational cooperation,
- the desire to ensure a real equalisation for regional funding allocations and not just funding between states.

The four organisations nevertheless wish to take forward discussions with the European Commission over the next few months to clarify a certain number of points contained in its proposal.
Finally, the organisations reiterated their will to continue stating their joint convictions on these issues and called upon all their members to take similar action within their own national political arenas over the next three years.
For the photographs of the meeting, please click here. For high definition pictures, please contact Patrizio Fiorilli.