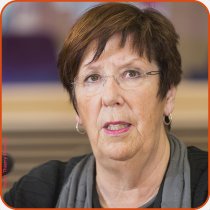 “We should not keep thinking the city in its administrative borders. A future EU urban agenda should facilitate the access and active involvement of all types of cities - small, medium-sized and large cities -  in the policy making process in relevant subjects and areas,” said CEMR President, Annemarie Jorritsma, at the seminar "An EU urban agenda – for and with cities"* on 17 February 2014.

The seminar was held as part of a series of debates organised by the European Commission that proposes to strengthen the urban dimension of its policies, including through an "EU urban agenda."

Today, more than two thirds of Europeans live in urban areas, giving rise to numerous social, environmental and democratic challenges. That is why we welcome the initiative launched by the European Commission, which represents a first step to give more weight to the local level. Nevertheless, since almost 80 % of rural population live close to an urban area, “we advocate for an EU urban agenda that takes into account the interdependencies of cities and their surroundings," stressed CEMR President.

The urban agenda should not be synonymous with new legislation

On average, 60% of the local agenda is influenced by decisions taken at the European level. Giving this situation, CEMR believes that the urban agenda should not create more legislation but consist of a framework to ensure that the local perspective is best reflected in EU legislation. To this end, the French Minister for Urban Affairs, François Lamy, proposes to establish a European platform for dialogue between Member States, EU institutions and European partners, including the CEMR. This process, supported by the CEMR, is expected to identify common European principles for urban development and to increase the visibility of the urban dimension within all EU policies and initiatives.

Towards a global sustainable urban agenda

In order to create a global commitment to sustainable urbanisation, CEMR President highlighted the importance of coordinating the voice of local authorities at European level and proposed a common vision on the international scene. While discussions are ongoing to develop the post-2015 UN development programme, CEMR and its world organisation, UCLG, call for the inclusion of a specific objective dedicated to "sustainable urbanisation".


* "Urban Agenda of the EU - for and with cities " is a seminar organised by CEMR and EUROCITIES as part of the event "Cities of tomorrow - Investing in Europe" organised by the European Commission on 17 and 18 February 2014.