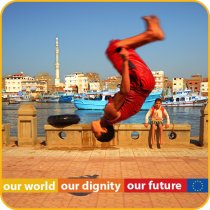 What to expect from 2015, the European Year for Development?

2015 is a special year for development. It is the first ever European Year to deal with the European Union's external action and Europe’s role in the world. The year will also be marked by the adoption of the new sustainable development agenda and the Paris Climate Conference.

More concretely, the EYD will focus on three objectives which aim to draw citizens into the development debate: inform EU citizens about development cooperation; foster their active involvement, engagement and interest; and raise awareness of the mutual benefits of development cooperation, both for partner countries and for citizens in Europe. For this purpose, the campaign will be placed under the motto "our world, our dignity, our future".

Unlike other European Years, the EYD will be structured around thematic months which will eachpromote specific themes: Women and Girls (March), Humanitarian Aid (August), Sustainable Development and Climate Action (November), Human Rights and Governance (December) etc.

Key events planned throughout 2015 include the launch of the EYD in Riga (Latvia) on 9 January, the Assisses of Decentralised Cooperation on 1 and 2 June, the European Development Days on 3 and 4 June, both in Brussels (Belgium), and the closing event of the EYD campaign - due to take place in Luxembourg 8 December.

The European Year for Development will coincide with the start of our strategic partnership with the European Commission. Efforts will be put to increase the contribution of European local government to more effective development outcomes in EU partner countries.

The formal signature of the strategic partnership is scheduled for 28 January 2015 in presence of EU Commissioner in charge of international cooperation and development, Neven Mimica, and the political representatives of all networks involved, namely CEMR-PLATFORMA, UCLG, CLGF, AIMF and UCLGA. CEMR will be represented by its president Annemarie Jorritsma.

​European Year for development: why 2015 will be crucial for local authorities?