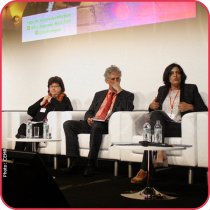 
The EU urban agenda is an opportunity to better involve local governments in the EU decision making process and to best match their priorities. This is one of the messages CEMR addressed during the European Cities Forum on “An urban agenda for Europe”, organised by the European Commission, on 2 June 2015.

Speaking on behalf of the CEMR, mayor of the municipality of Sala (Sweden), Carola Gunnarsson, put forward the following three messages:

Europe is characterised by a high number of small and medium-sized cities. Therefore, ‘urban’ in a future urban agenda must relate to cities, towns and municipalities of all sizes and include them when designing and implementing future EU initiatives.

Furthermore, since almost 80 % of rural population live close to an urban area, CEMR advocates for an EU urban agenda that takes into account the interdependencies of cities and their surroundings, including the countryside, to ensure a real economic, social and territorial cohesion in Europe.

2. An urban agenda should include the development of territorial impact assessment

Today 60% of a mayor’s political agenda is influenced by  European legislation. Therefore an urban agenda should help to systematically assess the impact of EU policies in our territories. To ensure real results, we call on the Commission to consult municipalities, regions and their representatives at a very early stage, since they have the technical expertise and the ability to provide rigorous input.

3. An urban agenda should follow the principle of governance in partnership

To better take into account the expertise and the knowledge  available at local level, CEMR promotes the concept of ‘Governance in Partnership’. Therefore the European Commission, Member States and local and regional governments have to cooperate to make sure that EU policies are successfully implemented on the ground.

Traduire
About the Forum “An urban agenda for Europe“

The consultation results are available on the European Commission website.