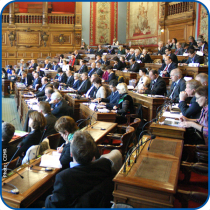 “Our towns and cities are at the forefront of efforts to favour climate-friendly development. In this global context marked by the urgency of climate change, Europe must leverage on its ability to create added value while proposing solutions.” This is what Alain Juppé, mayor of Bordeaux and AFCCRE president, expressed in a written message to mayors and local elected representatives coming together at CEMR’s Policy Committee meeting, on 7 December, in Paris.

Deputy mayor of Paris, Patrick Klugman, also attended the meeting and said that “we have made ourselves indispensable to the international community… We have been given a mandate by the COP21… We have to make sure this energy is all forced in the same direction up to and beyond COP22 [next year’s Conference of Parties in Marrakech].”

For her part, CEMR spokesperson on climate and energy, Sian Reid, councillor of Cambridge (LGA, UK), said “only through collaboration will we  achieve  our common  goals  of  decarbonising  our  societies, creating  green  jobs  and  providing a sustainable  world for  future  generations.  We support our members in aiming to achieve a 40% reduction of emissions by 2030.”

Other issues debated included the deadly 13 November terrorist attacks, the adoption of position papers and the appointments of new spokespersons. Here are the main highlights in summary form:

Members of the Policy Committee held a minute of silence in memory of the victims of the attacks committed in the city on 13 November. The tribute led to the adoption of a declaration “Acts of terror: A call from European municipalities, cities and regions”.

In order to strengthen the political representation and voice of CEMR, two new spokespersons have been appointed:

The mayor of Fontainebleau and AFCCRE secretary general, Frédéric Valletoux, invited delegates to send by March 2016 contributions, with the ultimate goal of feeding CEMR’s “vision of Europe and local government in 2030”, to be defined and adopted in Nicosia in the form of a blue book.

More information is available on the CEMR 2016 Congress website.