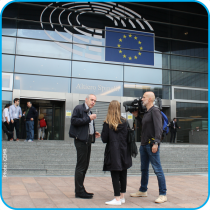 The vote of a majority of the English and the Welsh in favour of Brexit reveals the growing despair of the peoples of Europe concerning their leaders’ political decisions. The European Union is blamed for the economic and social hardships that our countries’ most underprivileged citizens have to endure – and yet, it is up to heads of state and government to decide upon the policies that European institutions implement; and many choices that guide the lives of our fellow citizens come first and foremost from national policies. The English and the Welsh also voted against zero-hour contracts, the lack of affordable housing, and a failing health system…

The Council of European Municipalities and Regions represents mayors and local and regional elected representatives: they are the ones who represent the voices and hopes of their fellow citizens. It is time to listen to them and to build a Europe that truly answers their hopes and needs, a more democratic Europe, that listens to all its territories.

Today is a dark day, but let us stand up again to revitalise the European project – CEMR has started a reflection process on a vision of Europe in 2030, seen by local and regional elected representatives. Today is an urgent time to reflect for all those who aspire to reenchant the European dream!
Frédéric Vallier
CEMR Secretary General