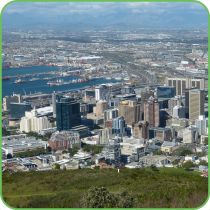 How does your city address energy and climate? A survey for Sub-saharan cities

By 2050, the urban population in Africa is expected to grow from 400 million to 1.26 billion - a threefold increase - Africa being one of the most vulnerable places to climate variability and change.

The goal of the survey is to help Sub-saharan cities in their fight for climate change prevention and adaptation. It will help collect feedback and data on the state of energy and climate planning in Sub-saharan cities.

The results of the survey will help shape COM SSA’s work, and will also be used to create a formal document that cities would have to sign and adhere to when joining the COM SSA. The signatories and co-creators of this document will be making a formal political commitment to take specific actions in terms of climate change prevention and adaptation – following the “FOR cities BY cities” approach to tackling climate change.

This survey is the first step in the development of the COM SSA - a bottom-up initiative to support local governments in developing ambitious plans for climate and energy.

How can your city become active in climate change prevention and adaptation?

Simply answer the online survey in English, French or Portuguese before 15 August. The entire survey takes less than 15 minutes to complete. All respondents will remain anonymous, unless otherwise requested.

Translate
COM SSA is part of the Covenant of Mayors for Climate and Energy, a global initiative of local governments committed to mitigating and adapting to climate change and ensure energy access in their towns and cities.