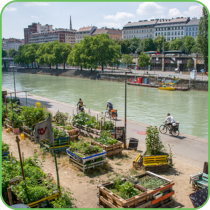 Come to the Climate Chance global summit in Nantes

Climate change is one of the most pressing issues of our time. In order to fight it, towns, regions, associations and many other non-state actors are stepping up and taking action.

The Climate Chance summit will address a vast range of topics, all concerning climate change; from biodiversity and transport to energy and agriculture and much more.

Many high-profile non-state actors will be at the summit. Here are some of the speakers and participants:

As an active non-state actor in the fight against climate change, CEMR will also be taking part and leading and organising different events at the summit:

•    Coalition on circular economy
•    Plenary session on Access to Energy
•    High-level focus session on the Global Covenant of Mayors for Climate and Energy
•    High-level participatory dialogue on The New Covenant 2030
•    …and many other events that you can find in the schedule – there are 6 plenary sessions, 18 forums, and more than 65 workshops that you can attend.

Drop a line on Twitter and join the discussion:

Something you want to share? Drop a line on Twitter and read what others are saying before, during and after the summit. Take part in the discussion via your own tweets using the hashtag #ClimateChance.