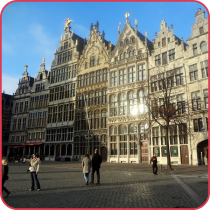 “Although in Flanders two thirds of public investments are done by local governments, VVSG has not yet received any invitation from the Belgian government to take part in the country’s delegation to Habitat III [final conference].” Declared Betty de Wachter from CEMR’s Flemish association, the Association of Flemish Cities and Municipalities (VVSG), regarding the seat at the global table.

Betty de Wachter was speaking on behalf of PLATFORMA at the UN City Hall Talk on the Habitat III process, organised by the UN Training Centre for Smart Sustainability (CIFAL) on August 30 in Antwerp (Belgium).

Ms De Wachter sketched out the four main demands reflected in PLATFORMA’s declaration on the new Urban Agenda: granting local and regional governments (LRGs) a seat at the global table of negotiations, ensuring the coordination of all the different international agendas as well as their localization, recognizing the diversity of LRGs and taking into account the needs of small and medium cities, and strengthening bottom-up governance.

Moreover, Ms De Wachter called for “the involvement of local governments in the design, implementation, and monitoring of public policies through formal partnerships between all levels of governments”.