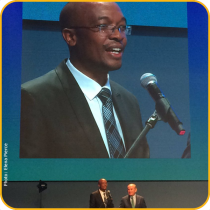 Mpho Parks Tau, who is also the President of the South African Local Government Association (SALGA) and councillor of Johannesburg (South Africa), won the election against the mayor of Kazan (Russia), Ilsur Metshin, by 103 votes to 42, for a mandate of three years.

The first African President of UCLG, Mpho Parks Tau is a strong believer in local democracy as a driver for development. During a speech he gave to the UCLG general assembly just a day before the election, Parks Tau told them: “I am confident that, with the support of all of you, UCLG will become the gate keeper of a world of solidarity, justice, respect for human rights and dignity for all.”

Replacing mayor of Istanbul Kadir Topbas at the head of UCLG, Mpho Parks Tau will be representing over 240,000 towns and cities and 175 local government associations worldwide. He will be defending their interests at major international milestones, such as the global agreement on Climate Change, the New Urban Agenda (Habitat III) and the Sustainable Development Goals (SDGs).

President Parks Tau takes the lead of UCLG with a team of mayors from all around the world. Here are the people who will be joining him: