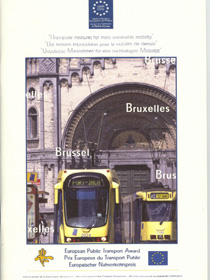 The Emilia-Romagna region and the city of Bologna, Cambridgeshire County Council and Bursa mteroploitan city are the winners of CEMR's 5th European Public transport awards.
This year's theme was 'how to ensure citizen's support for difficult, unpopular measures aimed at improving mobility while reducing pollution?".
EC Environment Commissioner Margot Wallström congratulated the winners at the award ceremony on 5 June.
The joint winners are the Emilia-Romagna region and the city of Bologna for their 'liberiamo l'aria" project. 9 provinces and 81 local authorities were involved in the project. One of the main ideas was to close the city centre to private traffic, others aimed at reducing traffic congestion by encouraging the use of public transport, reducing gas emissions and giving citizens full information about the measures. The jury was appreciative of the 'partnership" spirit of the project that involved all spheres of government (local, regional and national).
'To win the first prize is extremely important, said Emilia-Romagna transport Minister Alfredo Peri. It is important to motivate the local institutions that took part in this this project. It is also important for the citizens : this prize rewards everybody, all the actors".
Franco Pellizzer, on behalf of Bologna added that the prize 'will give the project stronger roots while being a jumping board for future measures".
(Web address to the project : www.liberiamolaria.it)

Cambridgeshire County Council won the second prize for their project entitled 'A radical approach to tackling traffic congestion in an historic city centre"
The scheme consisted of closing streets that led to the historic city centre. The main challenge was to get the support of the majority of Cambridge citizens.
This was achieved by consulting and involving them in the project.
'This prize will help us get the support of the residents for the 3d stage of the project due to be launched next August" said Cambridge City Council Network Manager Robert menzies.
(Web address to the project : www.cambridgeshire.gov.uk)
The third prize went to Bursa metropolitan City in Turkey. City authorities created an integrated transport system linking the West of the city and the city centre through a 16.5km metro-bus line. This link gives suburbs residents a fast and reliable transport means to the centre.
Mayor of Bursa, Erdogan Bilenser, said that the prize constitutes a reward for measures that are in favour of the citizens".
(Infos : merguzel@bursa-bld.gov.tr)
The jury gave a special distinction to the Dutch town of Dordrecht for its innovative scheme (the waterbus system) that offers an alternative public transport modality along the canals and rivers, and to the Werfenweg city (Austria) for its 'Holiday without my car" scheme.
(The prize was organised with the support of the European Commission and the Bruxelles-Capitale region)