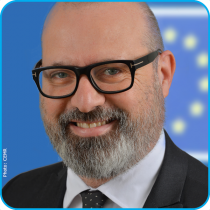 On 17 and 18 January, the European Parliament elected a new president, MEP Antonio Tajani, and 14 vice-presidents.

Following this election, the president of Emilia-Romagna region and CEMR president, Stefano Bonaccini, reacted to express his will to work hand in hand with the new presidency:

" Brexit and the rise of Euroscepticism throughout Europe are symptomatic of the disconnection between citizens and the European project. This calls for a reflection on the spirit of the European Union.

The election of the new European Parliament’s presidency comes at the right time for this reflection. All of us working in European public affairs, EU institutions, national, regional and local governments should take this opportunity to rethink what kind of Europe we want and need.

Municipalities, towns and regions are the closest level of government to citizens and the places where EU policies are most implemented. Thus, we are key actors to achieve this ambition for the benefit of our citizens.

CEMR represents more than 100,000 municipalities and regions through more than 46 national associations of local government in the European Union. Given our representative role, we are keen to put our knowledge at the service of the European Parliament and its new presidency to make the EU more relevant for the needs and demands of citizens. "

Best known for his role as an MEP or Commissioner, the newly elected President of the European Parliament, Antonio Tajani, also has experience at the local level: in fact, from 2001 to 2008, Mr Tajani was a local councillor in Rome. For more facts and figures on the new presidency, read our article on the matter.