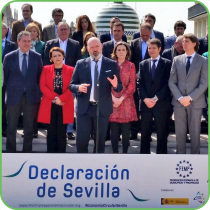 60 European mayors support the Seville declaration for a circular economy

This article was originally published in Spanish on the event's website.

60 mayors from Spain and Europe signed the Seville declaration (in Spanish) on 15 March 2017. The document was signed during the conference on “Circular economy: the commitment of cities” that took place on 15 march in Seville.

This document, jointly presented by the mayor of Seville and President of the FEMP’s (CEMR’s Spanish association) Spanish network of cities for climate, Juan Espadas; and the President of the Council of European municipalities and Regions (CEMR), Stefano Bonaccini, helps boost circular economy policies in cities.

By signing the declaration, signatories express the need to establish a sustainable development model that will allow to reduce the use of natural resources in order to enhance recycling and reuse.

During his speech, Stefano Bonaccini made clear that “we need to create opportunities out of the possibilities that are given to us with the circular economy to build new sustainable development model”, and new jobs. President Bonaccini also stressed that “CEMR will support this effort by promoting a path for sustainable development in which the circular economy will be at the heart of local policies.”

Among this declaration’s priorities, there is the promotion of social and economic activities that respect the environment and generate green jobs, the support for the call for “Cities for a circular economy” launched by the city of Paris in 2015, or the important role local governments play by being close to citizens.

Furthermore, the declaration insists on the need to reduce the impact that the current development models have on the environment, the climate and health. This should be done by enhancing collaboration between administrations in the case of local strategies for a circular economy, as well as public-private partnerships, among others.

The Mayor of Seville, Juan Espadas, stated that the commitment shown by cities is also a commitment to adhere to the European Union’s sustainable development policies:

“We commit to change the way do things, because the only things that really work are what we do in our territories and close to our citizens. We need to make our management of public services more sustainable, and define our priorities according to the population’s needs,” that is the only way we will be able to reach a circular economy.

Traduire
The Circular Economy conference is organised by CEMR’s Spanish association (FEMP), the city of Seville and Ecoembes, in collaboration with CEMR, Fundacion Cajasol, FAMP and Junta de Andalucia.