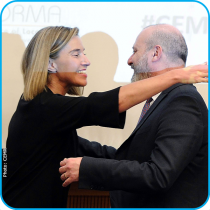 Federica Mogherini: “We need local governments’ pragmatism to build the future of Europe”

“We need local administrators’ wisdom, sense of responsibility and pragmatism to build the future of Europe.” This was the message the vice-president of the European Commission, Federica Mogherini, addressed today to mayors and regional leaders across Europe.

She made this statement as she launched the debate on “Local and regional governments and the EU: partners to promote democracy and global development”, organised alongside the Executive Bureau* meeting of the Council of European Municipalities and Regions (CEMR), which took place in Rome on 24 March 2017.

Reacting to this, the president of CEMR, AICCRE and Emilia-Romagna region, Stefano Bonaccini, declared: “We are aware that the peace we had for the last sixty years is a result of the EU. We don’t need to build walls. We need to build bridges, together with mayors and regional leaders, and their representatives associations.”

The debate marked the 60th anniversary of the signing of the Treaty of Rome. There was no better day to praise the historical role towns and regions played, and are bound to play in the future, in European unification. In this context, CEMR published a declaration to celebrate the anniversary. The declaration reminds us that mayors have been at the forefront of European unification since 1951, the year CEMR was born. It also states that we commit to engage in initiatives that support European democracy and the continuation of the European project, and that we will also contribute to the debate about the future of Europe.

A new era of cooperation between the CEMR and the CoR

One of the highlights of the debate was the signing of a Memorandum of Understanding between the CEMR and the European Committee of the Regions (CoR). The two parties commit to join forces for local democracy. The agreement also includes a reference to decentralised cooperation in candidate, neighbouring and partner countries. CoR President Markku Markkula expressed: “CEMR and the CoR play a strong role in the same place towards Europe.Our collaboration to build the future of Europe is crucial.”

Earlier in the day, CEMR officially joined the Pro-European Alliance for Democracy. This bottom-up alliance aims to coordinate and promote events and actions across Europe to strengthen European cooperation and secure democracy, for instance, by striving to increase voter turnout at the 2019 European elections. Launched by the European Movement International (EMI), its secretary general Petros Fassoulas, declared: “It is up to us, citizens and those closely engaged with them, to listen to people, to detect what citizens’ needs are.”

Towns and regions march for Europe

On 25 March, local and regional leaders, members of CEMR’s Executive Bureau, took part in the #MarchForEurope2017. This march brought together all of those who believe in a strong, united and democratic Europe. All the pictures are available on CEMR's Flickr account.

Translate
The Executive Bureau includes CEMR’s president, two co-presidents, the executive presidents, a maximum of 10 vice presidents and the secretary general. The Bureau follows up on Policy Committee decisions and, between Committee meetings, is responsible for CEMR’s work and policy.