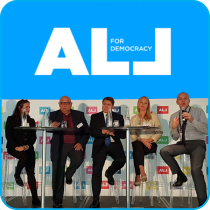 CEMR joins "ALL", the new alliance born to campaign for democracy in Europe

Civil society organisations, trade unions, businesses and local and regional governments  launched a new alliance named ALL today in Brussels. The alliance has been established to campaign in favour of European cooperation and democracy at a time when both are challenged.

ALL brings together different sides of European society as part of a diverse and inclusive campaign in the run-up to the European Parliament elections in 2019. Through a network of national partners, ALL will endevour to offer millions of Europeans a better chance to discuss and influence politics through democratic dialogue.

ALL was initiated by the European Movement International, working in partnership with the following organisations:

Petros Fassoulas, Secretary General of the European Movement International, stated: “We have come together to build a campaign that will foster democracy in action. We want to give people across Europe a chance to engage. We believe that by fostering democratic debate on the issues that matter to our fellow Europeans, we can make them part of the decisions that affect them ahead of the 2019 European Parliament elections.”

The secretary general of the Council of European Municipalities and Regions (CEMR), Frédéric Vallier states: “Europe is like riding a bicycle: we have to keep moving forward or we will fall. CEMR being the main representative organisation of Local and Regional Governments is eager to take forward discussions about Europe’s future with all stakeholders sharing the same core values: democracy, solidarity, decentralisation, inclusion and rule of law. Mayors and local leaders, being at the closest level of government to citizens, can play a decisive role in this endeavour.”

Markus J. Beyrer, Director General of BusinessEurope, an ALL partner, explains: “The European Union is built on the values of democracy and freedom. BusinessEurope has supported the European Union since the very beginning. There is no freedom of enterprise without free thinking and true democracy. Engaging in the debate on the future of Europe and working in partnership with ALL reflects this conviction”.

Luca Vincentini, Secretary General of the European Trade Union Confederation, says he is convinced that there is a profound need for a new kind of cooperation between all sides of society to defend and strengthen the great values on which Europe is built: democracy, human rights, freedom of speech and the rule of law: “We have joined the alliance because we want to engage our members in a debate on the future of Europe, which is open, inclusive and transcends sectoral lines and national interests.”

The Secretary General of the European Environmental Bureau, Jeremy Watts, has chosen to become a member of ALL because of the difficulties Europe is facing:

“Europe is faced with a multitude of challenges so this is the time to defend European democracy and cooperation. There is no other way than working closely together. We want to make Europe more connected and empower Europeans to take part in the debate on Europe’s future”.