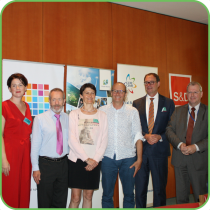 Today, local and regional leaders representing five major networks of local governments met with Members of the European Parliament to drive home the importance of local level involvement in EU energy and climate policy. Known as the Urban 5, these networks point to the local level’s power to provide jobs, its proximity to the people and its swift ability to deliver change as essential components for energy transition success.

Prior to the policy debate in the European Parliament, the Urban 5, comprised of Climate Alliance, the Council of European Municipalities and Regions (CEMR), Energy Cities, EUROCITIES, and ICLEI – Local Governments for Sustainability – outlined their position in a joint policy statement.

The paper targets EU policy makers as they negotiate the Clean Energy Package and EU budget and calls for a governance framework that empowers local governments to contribute to the energy transition. One important pillar of such a framework would be better access to finance for cities, towns, and regions to foster investments in local renewable energy. The right to self-produce and consume electricity is also cited as a way to encourage broad participation in the energy transition.

European local governments further call for a planning and reporting system that addresses barriers to delivering the Energy Union at the local level as well as for ambitious 2030 and 2050 energy and climate targets. This would put Europe on a path to meet its international commitments whilst improving the quality of life of its people.

MEP Theresa Griffin echoed the importance of the local level and the Urban 5’s calls, stating, “Citizens, cities, local governments and regions are the backbone of the energy transition. The Energy Union should provide an adequate framework to promote their full participation as this will enable us to respond to key challenges including the question of energy poverty.”

The political leaders present reiterated that delivery of the objectives of the Energy Union and the Paris Agreement will require engagement of the people in the transition process, shifting them from energy consumers to energy producers.

At the end of the successful event, MEP Claude Turmes invited the local and regional leaders of the Urban 5 to regular exchange meetings on crucial issues related to EU energy and climate policies. The next meeting is envisaged to take place by end of September 2017.