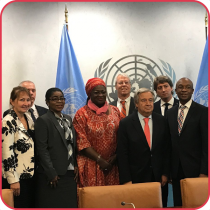 “Expectations are high on the objectives set by the UN towards local and regional governments; it is now time to see how we can work together to succeed”, stated CEMR Secretary General Frédéric Vallier, after a dialogue with UN Secretary General, António Guterres.

The meeting took place during the High-Level Meeting on the New Urban Agenda and UN-Habitat in New York (4-6 September). On the European side of the Global Taskforce delegation, Mr Vallier was accompanied by CEMR Co-president, President of our Norwegian association (KS) and Telemark Councillor Gunn Marit Helgesen; CEMR vice-president, Member of the Board of the our Spanish association (FEMP) and Mayor of Soria Carlos Martínez Mínguez and the Mayor of Madrid, Manuela Carmena.

Leaders of the global municipal movement met the UN Secretary General to discuss how local and regional governments could partner with the United Nations. António Guterres, a former local elected politician himself, promised to work closely with the different networks to strengthen cooperation on the Sustainable Development Goals, the implementation of the Urban Agenda and the Paris Agreement on Climate.

On 1st August 2017, the “High Level Independent Panel to Asses and Enhance the Effectiveness of UN-Habitat” presented its report to the UN Secretary General António Guterres. The High Level Independent Panel, co-chaired by UCLG President Parks Tau and Mayor of Paris and UCLG Co-President Anne Hidalgo, was appointed to conduct an objective and independent review of the effectiveness and efficiency of UN-Habitat.