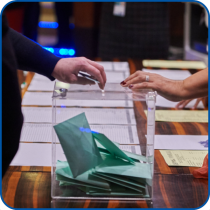 The elections results are now official. No, not the US mid-term elections. We’re talking about a different congress: the Congress of Local and Regional Authorities of the Council of Europe. On 6 November, CEMR Executive President Anders Knape was elected President of the Congress for a two-year period. That’s not all: CEMR Co-President, Gunn Marit Helgesen was also re-elected as President of the Chamber of Regions for two more years. Congratulations to them both!

“Sincere congratulations for this election, which recognises the great work done and engages us for even stronger cooperation for local democracy and decentralisation.” stated CEMR Secretary General Frédéric Vallier when he learned of the election results.

A few facts about Anders Knape and Gunn Marit Helgesen

Anders Knape was born in Karlstad (Sweden). He is Vice-President of the Swedish Association of Local Authorities and Regions (SALAR), and a councillor of Karlstad Municipality, his home town. More info in his biography.

Gunn Marit Helgesen is President of the Norwegian Association of Local and Regional Authorities (KS) since 2012. She is also a member of Telemark County Council (Norway), and represents Norway in the UCLG World Council and Executive Bureau. More info in her biography.

Last but not least, we would also like to extend our congratulations to the Mayor of Saint Gerand le Puy, Xavier Cadoret, who was elected President of the Chamber of local authorities.

27 June 2019, Brussels: the Congress and Committee of the Regions will hold a joint 25 year birthday celebration.