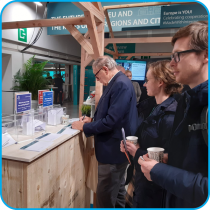 The microphones have been turned off and the curtains have fallen on the European Week of Cities and Regions (EWRC).

The week, which took place between 7 and 11 October, was the opportunity for over 6,000 local and regional leaders and experts to exchange ideas, engage with citizens and promote decentralised government throughout the continent.

In Brussels, CEMR held one the most visited and dynamic stands of the EWRC. The concept was simple. We asked visitors to answer the following question: “What is your recipe for reviving Europe?” Participants picked up card and pen and then dropped their ideas in one of the six boxes related to the EWRC's top themes. The reward: a chocolate offered for every idea.

170 ideas have been put forward, with  a majority of them relating to bringing Europe closer to citizens (43) or to creating a greener Europe (39). The third most picked-up topic was “the future of the EU and the role of local and regional governments” (34).

These include for instance a suggestion from Fabiola, who put forward the idea “for a more socially integrated Europe, to have a single international sign language (ISL) for deaf people.”

Jan, from the Czech Republic, wished the “EU institutions, national governments, ministries and municipalities” would be more tech-savvy, and “use mobile apps to communicate with the young generation. If something is more than a click away, they will not participate.”

An anonymous participant called on First Vice-President of the European Commission Frans Timmermans “to set a real EU strategy on the Sustainable Development Goals”.

The best suggestions from this bottom-up consultation will feed into CEMR’s work in the coming months, including in the framework of the upcoming Congress of European Municipalities and Regions, in Innsbruck from 5 to 7 May, under the motto “Local Action. Global Shift. Living the Sustainable Development Goals”.

CEMR also held, or participated in, no less than eight discussion sessions. These were an opportunity to engage with and influence the European agenda, making CEMR and its member associations heard in Brussels.