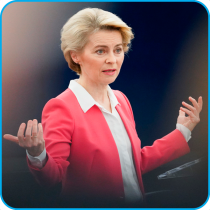 After much delay and uncertainty, the European Union finally has a new team at the helm, led by Commission President Ursula von der Leyen. In an impassioned speech in Parliament, von der Leyen laid out her agenda for the coming years, focusing on climate and digitalisation. CEMR has analysed today’s speech, highlighting the key take-aways, opportunities and threats for municipalities and regions.

1. The twin transition: the European Green Deal and digitalisation

“We should harness this transformative power of the twin climate and digital transition to strengthen our own industrial base and innovation potential.”

Von der Leyen was emphatic in presenting her programme under the twin headings of the new “European Green Deal” and digitalisation. She argues that environmental issues must be integrated across policy areas and that being a leader on climate action will also allow Europe to remain competitive economically. Furthermore, von der Leyen wants Europe to take the lead on tech, data and innovation.
Opportunity: Municipalities and regions will be crucial to the success of both the European Green Deal and digitalisation. Cities account for 70% of global CO2 emissions. Municipalities and regions will frequently be the ones making the necessary infrastructure changes for our economies to decarbonise. Local players are equally critical for to harnessing public data and digitalising administration.

“It is a generational transition towards climate neutrality by mid-century. But this transition must be just and inclusive – or it will not happen at all. [...] In regions that will have to make a bigger step than most, we will support people and businesses with a targeted just transition mechanism. It will cut across different funds and instruments and attract the private investment we need.”

As part of the Green Deal, von der Leyen specifically mentioned special support for carbon-intensive energy-producing or industrial regions in transitioning to low-carbon economic models. This represents welcome support to help regions adapt.
Threat: In her July speech in Parliament, von der Leyen had spoken of a “Just Transition Fund”. Now, she mentioned only a “mechanism” which “will cut across different funds”. This looks to be a step away from dedicated funds. CEMR has repeatedly warned that, to be effective, any Just Transition Fund must represent fresh monies and not be a mere repackaging of existing funds.

The promotion of gender equality represents one of von der Leyen’s flagship initiatives. While her team is has not quite achieved gender parity, 12 out of 27 commissioners are now women, a higher proportion than ever before.
Opportunity: Von der Leyen will present a comprehensive European Gender Strategy to move towards transparency and equality. Having recently published a groundbreaking study on the state of gender inequalities at all levels of government across Europe, CEMR looks forward to providing input in this area. We particularly want to see collection of disaggregated data on gender at all levels of government.

“We must support Member States with targeted investments and structural reforms. I cannot think of a better person to lead this work than Elisa Ferreira.”

Unfortunately, cohesion policy and local and regional governments were scarcely mentioned by von der Leyen at all.
Threat: Cohesion policy must not be thought of as a mere instrument for national reforms. As prescribed in the European Treaties, cohesion is a way to support underdeveloped regions, reduce territorial disparities and promote Europe’s “overall harmonious development.” Only by addressing such inequalities can Europe ensure that no one is left behind.

“Every Member State committed to the UN Sustainable Development Goals. And it is in this spirit that Paolo Gentiloni will oversee the implementation of the Goals.”

As a former prime minister and the new Commissioner for Economy, Paolo Gentiloni’s being given responsibility for the SDGs represents a serious upgrade for the Global Agenda at the EU level. This is the result of lobbying by the S&D group, who pushed to give more prominence to the SDGs. Time will tell whether the SDGs will actually be taken into account across policy areas.
Opportunity: Regional and local governments, being central to implementation of the SDGs, will have a greater chance to voice their concerns throughout the European policymaking process. See our study on how local and regional government associations are bringing the SDGs to life and our position paper on how to go even further with the 2030 Agenda.

6. Decentralised what? Eastern who?

“Countries from East to West, from South to North, need Europe to be a true partner. We can be the shapers of a better global order. […] We'll strengthen our partners through cooperation, because strong partners make Europe strong too.”

Von der Leyen was perhaps surprisingly brief on international cooperation, and did not mention the Eastern Partnership, even as she brands her new Commission as a distinctly “geopolitical” one.
Opportunity: Towns and regions play a key role in fostering direct ties between citizens and international development through decentralised cooperation. Here are our modest proposals for how we can can move forward on the Eastern Partnership and financing cooperation through the NDICI.

7. Conference on the Future of Europe

“We will mobilise Europe’s best energies from all parts of our Union, from all institutions, from all walks of life to engage in the Conference on the Future of Europe. It should be inclusive for all institutions and citizens.”

It's no secret that the European Union is in need of reform to face the challenges of the twenty-first century. The proposed Conference is tentatively planned to begin in February 2020 and conclude two years later.
Opportunity: Municipalities and regions should take up this chance to provide their input and shape Europe’s future. Dubravka Šuica, the responsible commissioner and the former mayor of Dubrovnik, had spoken very positively during her confirmation hearing: “local and regional authorities will be the most important because this is the easiest way to reach the citizens”.