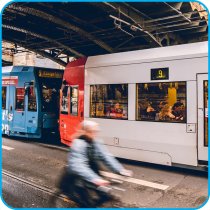 Towards a green recovery: the outlook for urban mobility

The various lockdown measures taken throughout the world prove our societies are capable of swift and radical change in order to safeguard public health. The economic cost however has been staggering and all governments now face the challenge of creating ‘the new normal’: how can our societies operate smoothly while minimising the risks of COVID-19?

The lockdowns have been effective at ‘flattening the curve’ of new infections. Their environmental side effects have furthermore been remarkable, with sharp declines in urban air pollution, carbon emissions and toxic nitrous oxide in our cities.

A strong recovery is however needed if businesses, government finances and millions of jobs are to be saved. This however poses certain environmental risks. For example, as a degree of social distancing becomes the norm for some time to come, there may be a massive increase in individual car use.

Furthermore, some national governments and business groups are pushing to postpone new environmental measures that are part of the European Commission’s Green Deal, which seeks to achieve carbon neutrality by 2050.

By contrast, many mayors are calling on the EU to turn the current crisis into an opportunity to accelerate the energy transition. United Cities and Local Governments (UCLG), published a decalogue calling for “a worldwide green deal” ensuring that “measures to reinvigorate the economy do not undermine legitimate environmental concerns.”

MEPs are also eager to make sure that there is a green recovery after confinement, without an overreliance on cars or unsustainable industries. Last month, the European Parliament called for “a massive recovery and reconstruction package” that both respects the Green Deal and fully exploits the opportunities of digitalisation.

There is no doubt that sustainable urban mobility will play a key role in any green recovery. Walking, cycling and public transport are not only environmentally friendly, but also highly affordable for citizens under financial pressure due to the recession.

During the crisis, cities acted swiftly to adapt their transportation systems to this emergency situation. Their actions have been quite varied however, both within and between European countries, with some suspending public transport and others taking a more relaxed approach, notably in Sweden.

In general, there has been a massive decline in road and rail transport, with continued use of bikes and new rules for public transport. However, many cities are already taking forward-looking action to transform mobility in the post-COVID era, particularly by promoting walk, cycling and teleworking.

In Milan, 35 kilometres of streets are being transformed to make way for improved walking paths and bike lanes. Manchester is moving to pedestrianise parts of the city centre, while London boroughs will be widening pavements and closing certain roads to traffic.

Even before the crisis, Paris had been moving towards a particularly ambitious project of becoming a “15-minute city”. The goal is for all residents to be able to find everything they need for happy and fulfilled lives within 15 minutes of where they live. This move towards localisation of public and private services has become all the more compelling in the age of COVID.

Municipalities are also taking action on the social and economic front. The City of Ghent has set up a “Relaunch Taskforce” to develop short- and long-term measures focusing on the most vulnerable, including the mobilisation of 25 million euros so far.

The use of public transport carries particular risks during a pandemic. However, there is no question that millions of citizens will continue to rely on buses and trains to get around. The question is how this can be done safely and with confidence.

There are many things policymakers can do to restore confidence in public transport. There must be coordination between levels of government, to make sure there is clarity for everyone as to what the roles and responsibilities of each are.

Public transport operators must be economically supported in light of the loss of ridership during the crisis. This is particularly important given their crucial role in providing transport to essential medical and other workers.

For instance, in Spain, our member association FEMP has called on the national government to create a Transport Fund to provide 1 billion euros to support innovative mobility and to mitigate financial losses due to the crisis.

Transport service levels should be gradually restored, accompanied by stringent standards for hygiene, including wherever possible the use of masks and electronic payment. Finally, we must invest more in sustainable mobility solutions, such as electric buses, so as to reduce emissions.