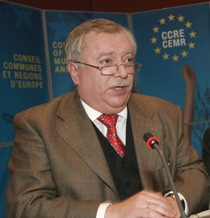 The Mayor and Governor of Vienna, Michael Häupl, has been elected President of CEMR for a three-year mandate, on 14 December 2004.
At its meeting in Maastricht (Holland), CEMR's Policy Committee, voted unanimously in favour of Michael Häupl, the only candidate to succeed outgoing president Valéry Giscard d'Estaing.
In his acceptance speech, Michael Häupl identified three priorities for the duration of his mandate : First and foremost, CEMR and its members must take the content of the draft European Constitution and translate it into reality. We are at the start of the ratification process and we must make it as successful as possible. We must convince people in our towns and regions that this constitution provides us with a series of vital instruments to build a better Europe.
Secondly, this constitution opens up new possibilities for towns and regions. But it is now for us to make use of these new opportunities for the benefit of the citizens we represent.
My third priority is cohesion, solidarity. I am particularly concerned with the implementation of the Lisbon strategy. Cities and regions have a specific contribution to make on this front to encourage sustainable economic growth in Europe, economic growth that keeps a social dimension.
But in our municipalities and regions, there is also a certain level of disaffection with the EU, and we must accept this reality; we must find the root of this problem in order to make the added value of Europe more obvious to the citizens. The founding idea of the EU was "peace in Europe". This still remains vital, but in addition we must demonstrate the importance and relevance of Europe to its citizens.
Valéry Giscard d'Estaing was CEMR president since 1997.
Michael Häupl's biography
Translate