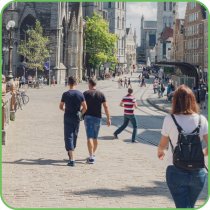 Local action towards circular societies: the view from Flanders

Each and every one us consumes resources and produces waste as a result of our daily life. From grocery packages to old electronics, to agricultural and industrial waste behind the scenes, each of us contributes to piling up of pollution on our planet. But by the same token, each us can also contribute to the solutions.

That’s why, on the occasion of the European Week of Waste Reduction, CEMR is zooming in the contributions of local governments in the shift towards the circular economy, an economy in which waste is reduced and reuse maximised. In the spotlight: Flanders, a region whose municipalities have been particularly active in this area.
Waste reduction and recycling have long been important topics in densely-populated Flanders. “We have so little space we have to recycle a lot”, says Elke de Taeye, Circular Economy Officer with the Association of Flemish Cities and Municipalities (VVSG).

Flanders is already doing well in some respects. The regional waste management agency processes 3.1 million tonnes of household waste per year, or 470 kg per inhabitant. That’s significantly less than neighbouring Germany (633 kg) or the Netherlands (513 kg). What’s more, the sorting of waste means 44.1% of household waste in Flanders is recycled and 21.5% composted.

However, much more needs to be done for the region to achieve its objective of becoming fully circular and waste-free by 2050. Indeed, the average Fleming has an ecological footprint almost five times great than what the planet can support, given the size of the global population. The circular economy also contributes to the fight against climate change: it is estimated that the wasteful ‘linear economy’ is responsible for about 50% of humans’ negative impact on the climate.

Circular economy efforts go far beyond waste management and recycling to a new holistic approach involving products’ entire life cycle. From the beginning, businesses need to design products in such a way as to be long-lasting and easily repairable if a component breaks down. Consumers need to ask whether they need the products they buy and, if so, whether it can be acquired second hand.

“Recycling really is one of the last steps in the circular economy”, says de Taeye. “We need effective action upstream and the engagement of many different parts of society to be achieve a complete shift.”
Circular economy then requires action changes in many different parts of society: from consumer patterns to product design to municipal policies. That’s why it’s important to have venues where very different players can work together. Circular Flanders is one such venue, a hub bringing together governments, companies, civil society and experts, to advise cities, businesses and consumers on how to reduce waste.

Local governments in particular can be leaders in this area, both by making their own administrations more sustainable and by bringing together citizens, businesses and other players at the local level.

Admittedly, the range of potential actions can be somewhat intimidating for municipalities taking their first steps on circular economy. Waste sorting and recycling, construction of buildings from reusable materials, promotion of social enterprises such as repair shops and lending centres: these are just some of the many things that can be done.

The Flemish city of Mechelen, population 86,000, has been a pioneer on circular economy and other environmental issues, efforts recognised by winning the European Green Leaf Award this year. The city has appointed at a Circular Economy Officer and proactively sought to promote waste reduction throughout its urban space. Practical initiatives include a project to collect and reuse textiles, repair cafés, bicycle sharing and a ‘tool library’ – a sharing service for domestic and garden tools.

VVSG activities on circular economy are currently focused on raising awareness among Flemish municipalities on the kinds of action they can take. “We do workshops on various topics such as waste management and procurement”, says de Taeye. “We also have a database with different types of actions municipalities have taken, which can stimulate and inspire other towns.”

The Flemish local government association has also published a report entitled Local and Circular: Working Towards the Future, which details 10 dimensions in which municipalities, citizens and other players can take action. These include areas as diverse as construction, textiles, food waste and industrial parks.

Above all, all towns and cities, great or small, should not hesitate to take action, even if the prospect seems daunting. “You don’t need to do everything at once”, says de Taeye. “Start in one area, learn and then expand from there. There’s so many things to learn but we can’t learn them if we don’t get started!”