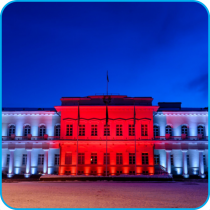 Light up your city hall in white, red and white!

25 March marks the unofficial day of freedom in Belarus, celebrated annually by the democratic opposition. On this occasion, the Council of European Municipalities and Regions, together with PLATFORMA, joins the campaign #DemocracyUnderPressure initiated by the Young European Federalists (JEF).

CEMR and PLATFORMA call on their member national associations of local and regional governments and other partners to join forces with the Young European Federalists’ local sections all over Europe and share this call with their member municipalities.

CEMR and PLATFORMA call on European municipalities, where it is possible, to light up public buildings (city halls or emblematic buildings) in white, red and white, the colours of democratic Belarus, on 25 March. Bologna, Riga, Stockholm, Strasbourg, Tallinn, Vilnius and other cities and towns already did so for the Day of Solidarity with Belarus on 7 February.

Since the contested presidential elections of 9 August 2020, Belarusians have demonstrated in the streets every day to dispute the re-election of Aleksander Lukashenka, who has been in power since 1994. These protests have been violently suppressed by the authoritarian government, forcing those political opponents who had not already been imprisoned to flee the country.

The European Union has refused to recognise the August 2020 election result and has placed sanctions against the Lukashenka regime. Moreover, the European Parliament awarded the 2020 Sakharov Prize to the Belarusian democratic opposition for their bravery and commitment to freedom of expression.

The EU plays a very important role in the area of the Eastern Partnership, promoting democracy, the rule of law and economic development. The EaP policy is seen as a key instrument to make governance systems in target countries closer to the EU standards.

Today, CEMR and PLATFORMA reaffirm their denunciation and furthermore: