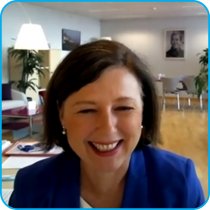 EU Vice-President Věra Jourová: ‘You have an accomplice in the Commission’

The European Union is a work in progress which has constantly changed with the times. In that spirit, the Conference on the Future of Europe is being held as a great occasion for elected leaders, civil society and citizens to debate what shape should take our continent and our Union

CEMR’s fourth annual retreat featured a debate on the future of Europe with the participation of local and regional leaders and high-level national and European officials. There was widespread agreement on the need for municipalities and regions to engage citizens in the debates, as well as to make their own voices heard in the Conference.

Věra Jourová, EU Commission Vice-President for Values and Transparency and former Czech minister for regional development, stressed the importance of municipalities and regions in promoting civic engagement. “Local and regional authorities are closest to citizens and are our crucial partners in the pursuit of common European goals and values, most recently also in promoting the Conference on the Future of Europe”, she said.

On the spending of EU cohesion and recovery funds, Jourová encouraged municipalities and regions to “be tough” with their national governments to ensure transparent and simple ways of spending the money. The Czech politician signaled that she is an ally on this issue: “If you need an accomplice in the Commission, I am here!”

Time to share our ‘criticisms and dreams’ for Europe

Clément Beaune, French Secretary of State for European Affairs, stressed that the Conference was unique moment for open debate and for citizens to express their criticisms and dreams for Europe. He argued that local and regional governments have to “make this debate known, encourage it, share it. This is a condition for the Conference’s success.”

Jan Olbrycht, a Member of the European Parliament (MEP) from Poland, said the EU was reflecting upon itself in the wake of Brexit and the COVID crisis. He argued for decentralisation in general as a way of strengthening the EU. “The Committee of the Regions and multi-level governance should absolute be reinforced”, Olbrycht said. “If they don’t reinforce decentralisation in Europe, the centralisation in each of the Member States will work against a stronger EU.”

A make-or-break moment for Europe

For Eva Maydell, an MEP from Bulgaria and the president of the European Movement International (EMI), are at a make-or-break moment for Europe. “The Conference on the Future of Europe will either be a catalyst for deep changes or it will be a moment of steep decline in trust and legitimacy of the European Union.”

To ensure success, Maydell stressed the need for strong communications campaigns to promote civic participation in the Conference, also at local and regional level. She argued that instead of general debates that could be too vague, there should be topical ones on issues of strong interest to citizens, such as healthcare, agriculture and edcation. She urged local governments to “take the pulse” of citizens and participate in the process of translating this feedback into political proposals.

These interventions were followed by exchanges with the mayors Oss (Netherlands), Cumpăna (Romania), Soria (Spain) and Mlade Buky (Czech Republic) and Thessaloniki (Greece), sharing their ideas on how to best include local and regional governments in the recovery and the conference.