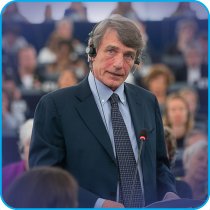 Passing away of David Sassoli leaves “terrible void” in Europe

It is with great sadness that we have learned of the passing away of David Sassoli, president of the European Parliament, at the age of 65.

“David Sassoli was first a journalist, and then an excellent politician and a man of the institutions, but he was above all an outstanding human being acting with commitment and passion for a Europe of and for the people, rights and openness”, said Stefano Bonaccini, president of CEMR and of the Emilia-Romagna Region. “His death leaves a terrible void in both national and international politics.”

“In addition to his deep European commitment and strong support for territorial development, President Sassoli will be remembered as the man who steered the Parliament through the worst of the COVID crisis, enabling MEPs to work effectively against and despite the pandemic”, said CEMR Secretary General Frédéric Vallier. “In the name of Europe’s municipalities and regions, CEMR expresses its condolences to his family, friends and his colleagues in the European Parliament.”

After a three-decade career as an Italian journalist, starting out in newspapers then moving to television and becoming a nationally known anchor, David Sassoli became a member of the European Parliament in 2009 as part of the centre-left Progressive Alliance of Socialists and Democrats group. Ten years later, he was elected President of the European legislative body.

Sassoli’s mandate was coming to an end this January. MEPs are expected to hold the first round of voting for his successor on Tuesday next week in Strasbourg.