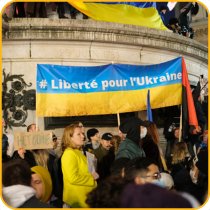 Russia’s war on Ukraine: the response of local and regional governments

It has been two weeks since Vladimir Putin launched Russia’s war against Ukraine. The Ukrainian people are the first victims. Ukraine’s mayors are on the front line mitigating the damage: organising shelters and evacuations, providing food and water and sharing essential information with residents. The European Union’s sanctions and the withdrawal of Western corporations are isolating Russia, but on the ground the bombs and battles roll on, neighbourhood by neighbourhood.

Mayors are coping with this situation with their residents and organised groups of military and territorial defence, where possible. The news we receive town by town is very hard to hear, each one becoming a fortress, while remaining connected to each other where possible through the associations of local and regional governments and the national government.

Local and regional governments bordering Ukraine are welcoming refugees in the best possible conditions. Further afield, countless municipalities across Europe are taking action. In Gent, a city platform has been created for residents to register their flat to host refugees. Meanwhile, the city of Paris is offering free transport and crèche spaces for refugees. Coordination with the national government is often taking place through our national associations.

Many questions continue to be asked about how to continue to support peers in Russia who oppose Putin’s regime and how to support the Russian population demonstrating against the war every day, while at the same time putting maximal pressure on Russia, and its Belarusian ally, to withdraw their troops from Ukraine immediately.

At our level, CEMR is doing what it can to support the Ukrainian people, Ukrainian local and regional governments, and all those affected by the war. In 14 days, over 700 mayors and local or regional elected officials have already condemned the Russian attack and expressed their solidarity with their peers in Ukraine by signing CEMR’s political declaration.

In addition, we are:
In the future we want to see how EU funds can be used to cope with the effects of the war in Ukraine and bordering countries and municipalities. The kinds of support needed must still be determined.

Looking ahead, CEMR is organising a task force with our members to exchange and coordinate on how to best support Ukrainian municipalities and the people of Ukraine. We will continue to provide regular updates on European local and regional governments’ actions in this crisis.