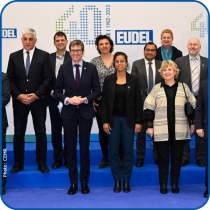 Secretaries General and Directors of CEMR’s member associations took part in an executive meeting to develop a common position on priority issues on the local and international agenda. They exchanged on the war in Ukraine, discussed a base document proposing joint measures on climate neutrality and decarbonisation of towns and cities and presented the actions of the Young Elected Committee. They also discussed statutory, general and internal affairs. This first face-to-face meeting after the pandemic took place from 5 to 6 April in Vitoria-Gasteiz, Spain on the invitation of the Association of Basque Municipalities (EUDEL) and the city’s mayor Gorka Urtaran Agirre. It has been attended by twenty delegates (from Czech Republic, Turkey, Greece, United Kingdom, France, Norway, Spain, Cyprus, the Netherlands...) and the rest of the attendees have participated online.

Renewing solidarity and support with Ukraine
Participants, in particular, renewed their full solidarity and support with Ukraine. In this complex international context, they called for unity of local and multilevel action. Marlène Siméon, Operations Director of CEMR explained that "Since its creation in 1951, the CEMR and its members have worked to promote the construction of a united, peaceful and democratic Europe, based on local autonomy, respect for the principle of subsidiarity and the participation of citizens, but also on twinning and solidarity between municipalities on the continent and beyond. This is why the war in Ukraine immediately provoked a reaction from CEMR, with an appeal signed by more than 750 mayors and local or regional leaders from all over Europe, condemning the Russian invasion and pledging to support the municipalities and cities of Ukraine." She emphasised that “in these times of pain and suffering, the European family of local and regional governments is united. Ukraine is part of Europe and we will continue to support it”.

40th Anniversary of EUDEL
The CEMR also participated in the ceremony celebrating the 40th anniversary of EUDEL. Chaired by Iñigo Urkullu, President of the Basque government, the celebration recalled the important milestones in the strengthening and transformation of the municipalities of the Basque country over the last 40 years. The association also paid a tribute to the people who have presided EUDEL since its creation in 1982. For 40 years, EUDEL has energetically participated in many of CEMR fields of action. They are strongly involved in policy and advocacy work. For example, EUDEL has contributed greatly to CEMR’s work on local gender equality and, in particular, the revitalisation of the European Charter for Local Equality currently underway. Building on the Basque Country’s long tradition of promoting effective gender equality, EUDEL has been an active player to ensure the Charter remains a useful and effective tool to mainstream gender equality in Europe’s territories. The whole CEMR is looking forward to many more years of collaboration with its Basque friends!