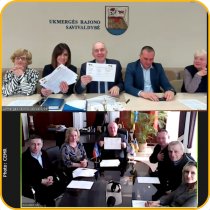 Despite the war, a project implemented by CEMR, PLATFORMA and supported by the U-LEAD with Europe programme, helps build bridges of trust between European and Ukrainian municipalities.

As a part of the “Bridges of Trust” Initiative, the Ukmergė District Municipality of Lithuania and Korostenska municipality in Zhytomyr region signed a partnership agreement.  This agreement was signed by Ukmergė Mayor Rolandas Janickas and Korosten municipality head Volodymyr Moskalenko.

“Korosten has suffered from Russian aggression – its schools, kindergartens, houses were bombed, there are dead and wounded locals. Therefore, it is so kind of Lithuanian friends to support Ukraine in such a difficult time. We are grateful to our friends from Ukmergė who sent humanitarian aid, which is distributed among our people, internally displaced persons and low-income people, we appreciate it very much,” said Volodymyr Moskalenko. Ukmergė district municipality sent humanitarian aid to its Ukrainian partner in the first weeks of the Russian war against Ukraine started.

In turn, Rolandas Janickas said that Ukraine is at the forefront of defending European values, and one can learn the real unity from Ukrainians that helps fight the enemy.

Heads of municipalities expressed hope for the successful cooperation in various fields and mutual visits after the war.

The two municipalities first met in November 2021, in the framework of the “Bridges of Trust” Initiative, implemented by Council of European Municipalities and Regions, PLATFORMA and supported by the U-LEAD with Europe programme.