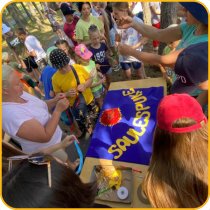 Twenty-one children and three adults from the municipality of Nizhyn in Ukraine had an opportunity to spend unforgettable days in a summer camp in Latvia. This took place between 27 June and 6 July at a place right next to the sea – Abragciems.

This was the initiative of the municipality of Preili, which has been cooperating with Nizhyn for several years. The summer camp was organised by the Children's Foundation in Latvia, however logistical support and transport was ensured through the successful cooperation of Preili, the Latvian Association of Local and Regional Governments (LALRG), the Viduslatgale Municipal Foundation, the Association of Ukrainian Cities (AUC), Nizhyn and 179 citizens from Latvia and abroad who have supported the initiative.

The camp was named "Sunflower" as this symbol is widely associated with Ukraine. The main aim of this camp is to let children who have seen war enjoy at least for a while Latvian sun and feel loved, safe and cared for.

The children who participated in the summer camp were aged 8 to 16. They were selected on the basis of three criteria: orphaned children, children who helped as volunteers during the war and distributed humanitarian aid to the population, and talented children (young artists).

A place of peace and healing

The group included children whose parents participated in the battles during the defense of Nizhyn, including two children whose father, an Armenian, has lost both legs in the battles. The children were accompanied by three adults: Tamara Stratilat, the Head of Nizhyn volunteer headquarters, joined by Angela Timchenko, the Director of the Nizhyn Youth Centre, and Galina Bianka, the Head of the volunteer organization "Time for us".

During the summer camp children participated in different activities. They were also provided with physiotherapy and classes with the possibility of using kinesiological taping and soft tissue techniques. Given the circumstances, the conversations with a psychologist were especially important.

The children not only enjoyed the sunny weather and seaside, but also participated in various outdoor sports activities, cultural and musical events, as well as excursions to discover Latvia, its nature and people. For example, they visited Rundale Castle and walked through the labyrinths of its beautiful park, enjoyed the magic and attractions of Tervete park, as well as participated at the expedition along the sea coast. They have left Latvia back home taking with them not only nice memories, but also different drawings and self-made souvenirs.

The municipalities of Preili and Nizhyn have been cooperating for several years already, mainly organising joint activities in the creative fields, involving children and young people. Both municipalities have also actively participated in the European Days of Local Solidarity (EDLS) and development education activities organised by the LALRG and PLATFORMA.

LALRG and PLATFORMA hope that this initiative has not only brought joy into the lives of Nizhyn's children and their parents, but would also serve as an inspiration for others to continue the cooperation, even during these times, when this is not easily done!

This story was first published by PLATFORMA.