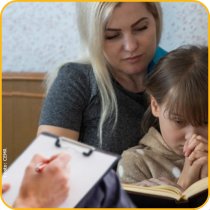 European cities and towns are facilitating access to mental health care professionals and psychological support for displaced Ukrainians, on top of practical measures relating to education and housing.

As the war nears its seventh month, refugee activists and mental health experts have also warned that the mental health toll on those who have fled the country must not be overlooked.

According to experts, the sudden displacement caused by the conflict has increased the prevalence of mental health conditions, including post-traumatic stress disorder, depression and anxiety.

In April, the European Commission mobilised €9 million from the EU4Health Programme to aid the Red Cross and other NGOs in offering mental health and trauma support for Ukrainian refugees.

“It is important to see the situation of displaced people in a holistic way, including the need of mental health support,” Commission officials told EURACTIV.

However, while “our governments and international organisations do offer a lot of solutions, some issues cannot be solved with a top-down approach,” said Maria Trybus, a young activist from the Polish Youth Council.

In her view, cities and civil society can help refugees by “creating safe spaces where they can talk about their needs, their worries.”

Trybus co-founded ‘You Have A Friend In Me‘, an online platform connecting young Poles and Ukrainians.

The idea behind it is to “create a substitute of normality as well as some sort of impromptu safety net,” she explained during the World Urban Forum in Katowice.

Some European municipalities have also taken the initiative to provide psychological support to refugees, although health competences generally fall on the national government.

For instance, the city of Milan supports Ukrainian refugees hosted in municipal structures through assistance teams, including psychologists, to address basic needs and mental well-being.

“This allows to monitor the situation and identify possible situations of malaise and unease requiring specific assistance,” Lamberto Bertolé, councillor for welfare and health at Milan municipality, told EURACTIV.

Moreover, the city has organised activities with a local theatre to help Ukrainians process the trauma caused by the war in their home country.

The municipality relies on a network of associations to reach those hosted by families or relatives.

“The essential thing is to reach people because it’s not granted that demand and offer will meet,” the councillor said, adding that offering services in the Ukrainian language are crucial.