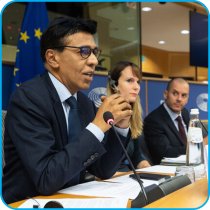 In a world of crises, local governments reflect on how to anticipate the next mega-shocks

The world, and Europe in particular, are being wracked by multiple crises. We have all been affected by the pandemic, climate change, and, now, a deepening energy crisis. As serious as these events are, we already know that more great transformations are on the way this century.

The sheer scale of transformations is daunting: extreme weather events, the energy transition, demographic change and artifical intelligence will all impact our societies in profound ways in the years to come.

Anticipating and responding to such changes requires both effective foresight and the contribution of all levels of government. That's why, on the occasion of CEMR's annual retreat, CEMR and the European Parliamentary Research Service (EPRS) held a joint event on Monday (26 September) drawing attention to future shocks and have signed an agreement to formalise and intensify their collaboration.

A century of crisis and transformation

Local, regional and European elected officials gathered in the European Parliament in Brussels to discuss how local and regional governments can anticipate and respond to future shocks. The EPRS presented their "Future Shocks 2022" study outlining the diverse set of risks Europe faces as well as possible policy responses.

The participants emphasised the multiplicity of current crises and upcoming changes: the pandemic, climate change, democratic alienation and populism, demographic changes, along with war and the resulting refugee waves and energy crisis.

These crises are heightening inequalities and poverty, and leading to a degree of uncertainty unheard of since the Second World War. "Uncertainty is impeding human development across the globe" said CEMR Secretary General Fabrizio Rossi. "For the first time ever, the Global Human Development Index has declined for two years in a row. This means people face falling standards of living and worse quality of life in many countries."

Younous Omarjee, a French MEP and the chair of the Committee on Regional Development (REGI), emphasised that, in addition to today's crises, tremendous transformatory changes were already underway and would continue to be amplified this century.

These include the ongoing mass extinction event of the Anthropocene, a "demographic revolution" with Europe's population stagnation and the growth of Africa to 4 billion people by 2100, worsening natural disasters, the rise of "emerged powers" like China and the ongoing technological revolution of digitalisation and AI.

Local leaders from France, Georgia and Malta outlined what these crises mean in their communities. Karine Gloanec Maurin, regional councillor for Centre-Val de Loire in France, hailed the swift provision of European cohesion funds to help local governments tackle the COVID crisis. The EU had been much swifter to respond than in previous crises.

Francine Farrugia, local councillor for Siggiewi Municipality in Malta, stressed that these crises are already being experienced by ordinary people and cannot be solved without their participation. Maltese are already facing rising temperatures and are contributing to mitigating climate change by reducing car usage (promoted notably through car-free days) and diversifying the country's energy mix.

Farrugia emphasised local governments' crucial pedagogic role. "It is important to educate people on what the challenges are, what the issues are and how we can solve them on a day-to-day basis", she said.

Magda Kostova, a member of Kutaisi City Council in Georgia, highlighted the challenges faced by her city, one of the oldest in the world, having been founded over 2500 years ago. These challenged include the threat of Russia – Georgia having only freed itself from Soviet occupation three decades ago – and a high level of emigration, especially of educated youth to the capital Tblisi and the West. In tackling these diverse challenges, Kostova stressed that Georgia's future lies in the European Union and its values.

In anticipating and reacting to this century's profound crises and transformations, it is crucial that policymakers be informed by accurate and relevant research. That is why CEMR and EPRS signed on Tuesday a Memorandum of Understanding to intensify their cooperation.

"I am very pleased with the good cooperation that has developed these past years between EPRS and CEMR, and which is now being formalised and strengthened for the years to come" said EPRS Acting Director General Étienne Bassot.

Our organisations will regularly exchange on policy priorities and their ongoing work and events, as well as participate in events of mutual interest. In particular, CEMR will provide information, based on local governments' knowledge and experience, for EPRS' research and share relevant parliamentary studies with local and regional government associations.