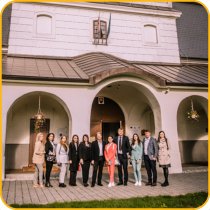 Josef Berta, mayor of Sol’ in Slovakia, knew right away that he wanted to partner up with Solotvyno in the neighbouring Zakarpattia region of Ukraine. Both municipalities share a history connected to the salt deposits present in both territories. The partners first met online in the fall of 2021 and decided to explore to cooperate and set up joint activities to exchange best practices and develop local officials' capacities.

After the Russian attack on Ukraine on 24 February 2022, the spring visit to Sol’ was postponed and the focus was shifted to emergency needs. Firefighters from this Slovak village, together with some local officials, were among the first to arrive on the border to meet and provide help to the thousands of Ukrainians that were fleeing the war. At this time, Solotvyno was also welcoming internally displaced people that were arriving from other regions of Ukraine that were under attack.

The opportunity to meet in person came in September. Sol’ has a very impressive record of winning EU funding and is number two in the region for the number of EU grants received per capita. Mayor Berta and his team presented the details behind the projects to the Ukrainian delegation and showcased results with visits to the school, a renovated historical building, the volunteer fire fighters brigade and more.

The delegation also visited a local business that received funding from the EU in a project that aimed to boost entrepreneurship and create job opportunities in the area. The partners also discussed the possibility of applying for funding to implement joint projects under cross-border cooperation or other EU programmes.

"We are extremely impressed with the visit to Sol’", said Bohdan Makusii, Head of Affairs of the Solotvyno Village Council. "We hope for the establishment of close and long-term cooperation between our communities and the implementation of joint projects that will improve the lives of the population of the two communities and quickly integrate Ukraine into the European Union."

Solotvyno representatives learned about the surrounding Prešov region and the current drivers of economic development in the area. The delegation was also invited by the mayor of Vranov nad Topľou to take part in a ceremony recognising locals' professional and personal contributions. On this occasion, the Director of the Cultural House also presented cultural projects that were funded from the EU grants.

Taken together, the cooperation between Sol’ and Solotvyno shows how municipal partnerships can be a driver of reconstruction in Ukraine: by sharing local expertise, capitalising on EU opportunities and bringing people closer together across borders.

Bridges of Trust is implemented by the Council of European Municipalities and Regions and PLATFORMA, and is supported by the U-LEAD with Europe programme, a multi-donor action of the European Union and its member states Germany, Poland, Sweden, Denmark, Estonia and Slovenia.