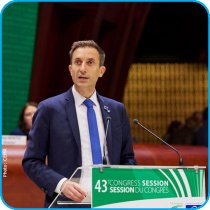 Mathieu Mori has just been elected as the new Secretary General of the Congress of Local and Regional Authorities of the Council of Europe for a five-year term of office. Secretary General of the Assembly of European Regions and then Director of the Interreg North-West Europe transnational cooperation programme, local and regional governments have been crucial to him all throughout his career.